It was on 14th August 1994 that HRH Princess Maha Chakri Sirindhorn, the Crown Princess graciously mentioned an initiative to Dr.Sumet Tantivejkul, secretary-general of the Office of the Royal Development Projects Board at the time, at Mrigadayavan Palace to secure suitable land for mangrove planting and rehabilitation. On 17th August 1994, the princess planted several types of mangrove trees at the entrance of Khlong Bang Tra Yai and Khlong Bang Tra Noi and graciously gave additional initiatives to the Superintendent 1, Tactical Training Division to conducted a study to find out how to care for trees planted to survive and continue planting further at the Bang Tra Yai and Khlong Bang Tra Noi.

On 2nd April 1998, while the princess was riding her bicycle and jogging around Rama VI camp, she saw soil and abandoned land conditions with salt crust, and gave an initiative to Lady Putri Viravaidya to find ways to rehabilitate such mangrove forests and degraded soil to once again become green and naturally fertile enough to use as recreational areas and ecological study site. 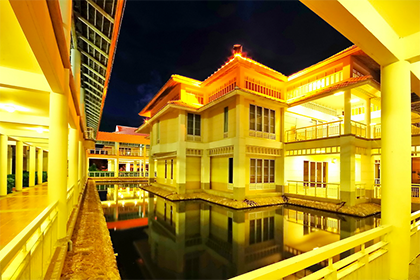 In 2000, the Border Patrol Police Bureau (BPPB), Huai Sai Royal Department Study Centre, and the Foundation for Mrigadayavan Palace under the patronage of HRH Princess Bejaratana Rajasuda Sirisobhabannavadi jointly established an international environmental park at Rama VI camp in Amphoe Cha-am, Phetchaburi, for presentation to HRH Princess Maha Chakri Sirindhorn in 2003, to be named 'The Sirindhorn International Environmental Park (SIEP)' to celebrate on the occasion of Her Royal Highness Princess Maha Chakri Sirindhorn’s Forty-eighth Birthday Anniversary. Its operation was designed to follow the initiatives and work during her work-stay at the camp in the hope that it will become a living natural museum which represent HRH the Princess’s honourable deeds and ingenuity in conservation of nature, environment, history, and culture, to both Thais and foreigners. Its mission also to be a study centre for the recovery of mangrove, beach and mixed deciduous forests, and habitat of fauna. In addition, the park will help promote ecotourism, and historical tourism for Thailand and the world.

The Sirindhorn International Park is managed by the foundation of SIEP which came under the patronage of HRH princess Maha Chakri Sirindhorn on 28th May 2002 with Mr.Sumet tantivejkul as a Chairman of foundation board. The foundation formulated management plans following her wishes.

On 19th July 2008, Her Royal Highness Princess Maha Chakri Sirindhorn graciously granted a royal audience to officially open the Sirindhorn International Environment Park. The board, the staffs and every related sections were very delighted to be a part of this ceremony. 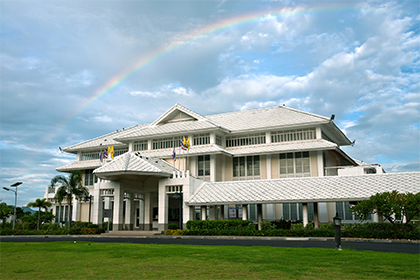 At the top are the royal initials “Sor Tho”, referring to the celebrations on the occasion of Her Royal Highness Princess Maha Chakri Sirindhorn’s Forty-eighth Birthday Anniversary, for the honourable deeds and ingenuity of HRH the Princess in the conservation of the environment, history, and culture.

A picture of the green tree means the Sirindhorn International Park is a place for the rehabilitation of the environment, mangrove forest, and mixed deciduous forest. It is also a habitat of fauna, which is represented here by a picture of birds. Those birds flying to feed or nest somewhere implies that such place has an abundance of forest and various species of animals.

The blue line means the rehabilitation and protection of mangrove forest and beach forest to regain its abundance, like the kindness from HRH the Princess who has continued to provide assistance to the protection of forested land that is the habitat of wild animals and species of plants.

The blue figure includes an ocean, sea, fish, corals and sea grass. The Sirindhorn International Environmental Park is a coastal park rich in natural resources. The park is like an ecotourism and historical attraction of value of Thailand and the world. 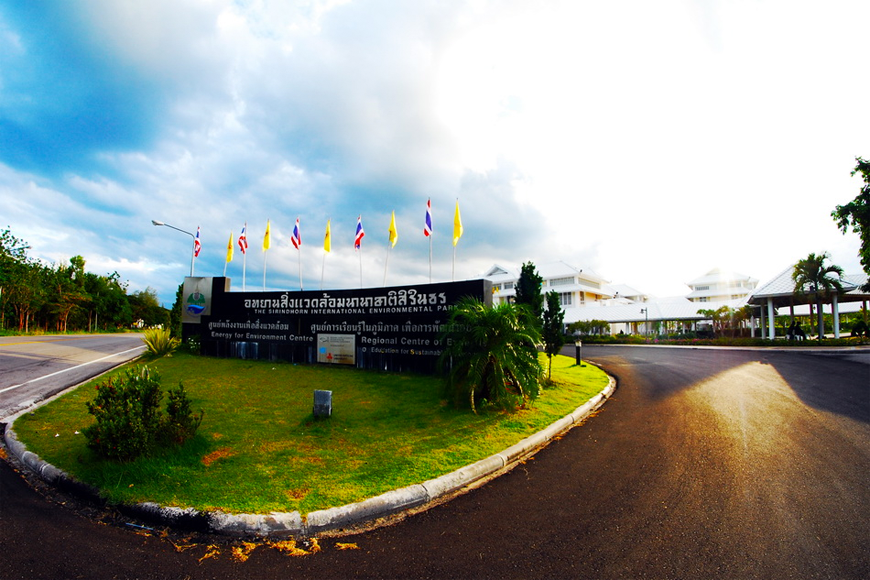